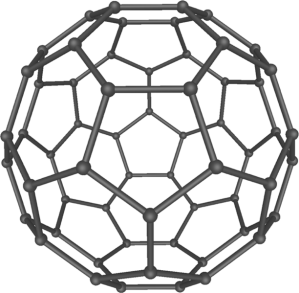 A 3D model of a C60 molecule, also called a “Buckyball”. Created by Michael Ströck (mstroeck) on February 6, 2006 from Wikipedia.

When I first read this I thought it was a hoax. It might still be a hoax but I haven’t seen any indication that it is in my research. It might also be a mistake or misinterpretation of data but only time will tell about that.

Scientists were investigating the toxicity of a carbon molecule consisting of sixty carbon atoms called a fullerene (chemical formula C60). Fullerenes are carbon molecules arranged in a spherical shape somewhat in the manner of a geodesic dome, hence the name “fullerene” from Buckminster Fuller, the creator of the geodesic dome. They dissolved the molecules in olive oil and administered it to rats. A control group of rats just got olive oil. Not only was the olive oil with fullerenes not toxic but it almost doubled their lifespan of the test rats. All of the test rats with the fullerene treatment were still alive when the last control rat had died.

There is a great write-up of the research at Anti-Aging Firewalls along with additional medical research on fullerenes. The author there states: “Further, given that the super-aged rats lived long beyond the period of months when they were treated with the C60-olive oil cocktail and that C60 rapidly clears from the body, some long-lasting shifts in cell and organs must have been created. I hypothesize that other more-fundamental mechanisms are critically involved, such as C60 impacts on strengthening DNA, effects on microtubules or in the mitochondria and epigenetic impacts. These may well involve quantum-level phenomena largely ignored in biology up to this point.”

I have predicted in the next hundred years we would likely extend human lifespan significantly. This may be the beginning of that happening.

But wait! That’s not all.

Fullerenes are found in outer space and may have had a role to play in the origin of life. An article argues the fullerene surfaces may have provided a surface for the development of early life.  “Conceived here is an evolutionary process in the archaic past that progressed far beyond the formation of nucleobases on fullerene surfaces. A universal origin of life from dying stars, rapid because it is expressed in parallel rather than sequential lines of development, extends evolution to well before the circa 4.5 billion years available on Earth and invites research with promise for the future”.

This entry was posted in Origin of Life, Transhumanism. Bookmark the permalink.

2 Responses to Fullerene and Life