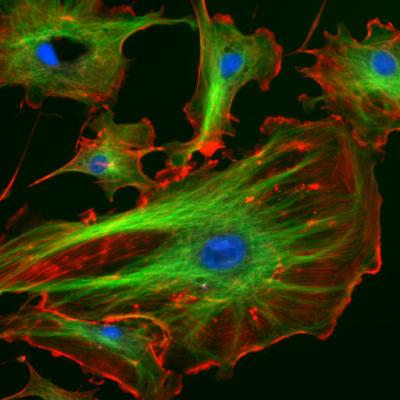 Endothelial cells under the microscope. Nuclei are stained blue with DAPI, microtubles are marked green by an antibody bound to FITC and actin filaments are labelled red with phalloidin bound to TRITC. Bovine pulmonary artery endothelial cells (This is a file from the Wikimedia Commons.)

My position on mind and consciousness is a materialist position. A materialist believes that everything is matter, that there is nothing above or beyond matter, that mind and consciousness are matter or derivable from matter and physical laws. By “matter”, I mean “matter” in the very broad sense that matter and energy, wave and particle, are all material. The strict materialist position must be that there is nothing that is not matter. So even an emergent property such as mind or consciousness would also need to be material.

If the materialist lets into his model anything that is not matter then the floodgates are open and there would be no reason to rule out a priori other non-material emergent properties – ghosts, spirits, God, or whatever. This is precisely Nagel’s argument in Mind and Cosmos – that is there is something about consciousness that is not material. So the strict materialist cannot argue that consciousness is non-material, even if it is an emergent property and dependent upon the underlying matter. Just arguing it is dependent upon the underlying matter isn’t sufficient.

So what kind of material is mind?

A key argument for the material view of mind has been general anesthetics. If we take a person and administer a general anesthetic, such as ether, consciousness is shut down. When the effect wears off, consciousness returns. The materialist can declare confidently that consciousness must be the product of brain chemistry. Roger Penrose and Stuart Hameroff make a twist on this argument. (1) The list of chemicals that can serve as anesthetics includes some very different chemical substances – ether, nitrous oxide, chloroform, and xenon. Xenon, if you remember your chemistry, is on the right hand side of the periodic chart with a group of elements called noble gases that include helium, neon, and radon. These gases are mostly inert – they react hardly at all with other elements. So how can xenon affect brain chemistry if it does not react with other elements? Here’s another interesting observation. Anesthetics administered to one-celled organisms, such as amoeba, at about the same proportional dose that would render a person unconscious, cause them to become immobilized. Are amoebas conscious?

Penrose and Hameroff believe general anesthetics operate through van der Waals forces in microtubules. Van der Waals forces are weak attractions between molecules that are not chemical. Geckos, it is believed, are able to cling to walls and ceilings through van der Waals forces. Most molecules have an uneven arrangement of charges because of the way the atoms are arranged on the molecule. As different molecules come in close proximity these molecules can affect the shape and behavior of each other. Microtubules are part of the cytoskeleton that is found in all cells. They are hollow tubes that consist of tubulin and have a role in transporting material in the cell, help to maintain the structure of the cell, and are the main component of cilia and flagella. Flagella are the small flipper-like structures that some one-celled organisms use to propel themselves. Tubulin is a fascinating molecule that grows and shrinks dynamically by itself. (Check out this video.)  Penrose and Hameroff suggest that general anesthetics work by disrupting part of this process. So a disruption in the switching in tubulin could explain the immobility of the amoeba as well as the lost of consciousness in the human. We might also speculate that consciousness altering agents might operate though a similar mechanism but instead of shutting down consciousness they produce a modification of it. The differing effects of the various agents might be explained by different arrangements of the charges in the molecular structure of the agents.

The significance of this is that consciousness does not reside in chemistry or firing neurons, though these things may be critical for consciousness to take action in the world, but in subtle electrical forces governed by quantum dynamics. What’s more it resides in an evolutionary old structure, the cytoskeleton, which may have been re-purposed from its functions in one-celled organisms to the provide consciousness to organisms with complex nervous systems.

We might, however, speculate that form and shape in the organic has origins in fundamental physical principles that operate from the atomic level to the level of complex organisms and perhaps even to encompass mind and consciousness.

Despite centuries of study, researchers still know relatively little about the forces that guide atoms to self-assemble into molecules. They know even less about how groups of molecules join together to create living cells and tissues. Over the past two decades, however, I have discovered and explored an intriguing and seemingly fundamental aspect of self-assembly. An astoundingly wide variety of natural systems, including carbon atoms, water molecules, proteins, viruses, cells, tissues and even humans and other living creatures, are constructed using a common form of architecture known as tensegrity.

The term “ tensegrity” was first used by Buckminster Fuller and his geodesic domes are examples of its technique. The key to the technique is that structural integrity is maintained by dynamically spreading the load dynamically throughout the structure. As stress increases on the structure, it becomes distributed and no single point becomes a point of failure. Geodesic like structures can be found throughout all forms and at levels of life.

The principles of tensegrity apply at essentially every detectable size scale in the body. At the macroscopic level, the 206 bones that constitute our skeleton are pulled up against the force of gravity and stabilized in a vertical form by the pull of tensile muscles, tendons and ligaments… In other words, in the complex tensegrity structure inside every one of us, bones are the compression struts, and muscles, tendons and ligaments are the tension-bearing members. At the other end of the scale, proteins and other key molecules in the body also stabilize themselves through the principles of tensegrity. .. Tensegrity can be invoked to explain more than the stabilization of cellular and nuclear form. For example, Steven R. Heidemann, working with Harish Joshi and Robert E. Buxbaum of Michigan State University in the mid-1980s, found that tensegrity can explain how nerve cells extend long, thin projections called neurites, which are filled with microtubules and transmit electrical signals in the nervous system. This growth is required for repair of nerve damage.

Ingber points to the examples of fullerenes, viruses, enzymes, organelles, cells and even small organisms to argue that there is a universal pattern that is evidence of common rules of self-assembly. In particular, all these entities stabilize themselves in three dimensions in a similar way: by arranging their parts to minimize energy and mass through continuous tension and local compression–that is, through tensegrity.

We could take argument even farther back, as Ingbar does, to speculate that tensegrity is the optimal solution for how all mater, not just organic matter, organizes itself in space. He gives an example of sodium, an explosive metal, and chlorine, a poisonous gas, combine to form sodium chloride, table salt. “The important principle here is the manner in which a structure shapes itself and holds its subcomponents together in three-dimensional space; this characteristic is what defines the way the structure as a whole will behave”

Could we also take the argument forward to understand how mind and consciousness came from matter? Could consciousness be a sort of dynamic balancing and optimal organization of something (matter?) in space and time? Could it in in a sense be just another structure such as fullerenes, cytoskeletons, and bones are?

This is the ultimate materialist argument but it has buried within it a deep secret. There is really no matter. What we think is material is structure – from the atom to the mind. If consciousness is material then the material would be in some sense conscious. Consciousness is one of the optimal solutions for matter to organize itself in space and time.

This entry was posted in Consciousness, Origin of Life, Quantum Mechanics. Bookmark the permalink.

14 Responses to Mind, Life, and Tensegrity